(March 16, 2001 to June 02, 2001)
The town of San Nicolas is more like a sentinel that guards Laoag City on the southern side which in part situated at the northwestern portion of the province of Ilocs Norte. This town can boast of several home cottage industries wherein the people earn their means of livelihood.
The eastern part of the town has clay soil that gave rise to pot-making, one of the oldest and the most popular industry of the town. Unlike other ceramic industries, the potters of the town, usually from Barangays #6 San Juan Bautista, #7 San Miguel, #8 San Rufino and #9 San Lucas, could make money out of clay without using any chemicals at all. Instead, they use paddles, anvil and stones to form earthen products. While it is true that these people look so miserable under the noonday sun with dozens of pots on their heads, these industrious pot-makers of San Nicolas are at the same time economically self-sufficient and happy with their way of life. 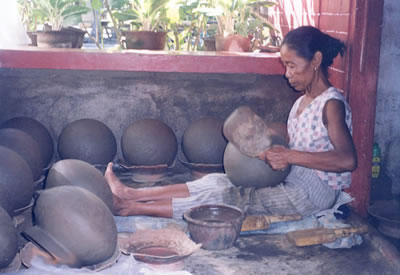